Hotel in Palace of  Versailles – France

The recent inauguration of the Airelles Château de Versailles, Le Grand Contrôle, the first hotel in history located inside the Palace of Versailles, where it was the official residence of the kings of France between 1682 and 1789.

The Palace of Versailles located an hour from Paris, has 14 rooms and suites that occupy three historic buildings: le Grand Contrôle, le Petit Contrôle and the Pavillon des premières cent marches, overlooking the Orangerie, the Pièce d’Eau des Suisses and the castle. Built in 1681 by Jules Hardouin-Mansart, Louis XIV’s favorite architect, it has been meticulously claimed by the prestigious interior designer and designer Christophe Tollemer.

Each of the rooms has been named after some personality linked to Versailles. Its unique decoration has followed the stylistic patterns of the time in the use of fabrics, colors, designs, tapestries and furniture from the 17th and 18th centuries, so artisans from different disciplines have participated in the entire project.

The architect Jules Hardouin-Mansart, famous for completing the Palace of Versailles, designed Le Grand Contrôle in 1681. It was initially a private home for Paul de Beauvilliers, a government official under King Louis XIV. It became the home of Necker, France’s finance minister during the reigns of Louis XV and Louis XVI.
It was also used as a hospital before Napoleon stationed his army there. Its last function before becoming an empty space was as a catering room for the officers of Versailles.

The transformation of this historic building, located inside the gates of the Palace of Versailles, into the most anticipated new hotel in France. All traces of the glamorous world before the French Revolution have been preserved.

Architect and interior designer, Christophe Tollemer, was appointed to painstakingly restore the property to its original 18th-century splendor, a task that required spending many hours perusing the palace archives.

The year 1788, the year Marie Antoinette redecorated the Petit Trianon, as well as that of the last inventory of Le Grand Contrôle, was selected as the benchmark for the renovation. A dedicated Scientific Advisory Committee was established to oversee the restoration and ensure accuracy and authenticity at all times.

Tollemer, who also designed the existing Airelles properties, carefully selected original 18th century furniture, art and artifacts representative of the time, drawing direct inspiration from the neighboring Petit Trianon Palace and the personal style of Louis XVI. He worked closely with Emmanuelle Vidal-Delagneau, a French art and heritage specialist, on the selection of authentic art and objects from the 17th and 18th centuries.

Luxurious and Elegant, the 14 rooms and apartments are each named after a notable figure from the past. They are inspired by the houses of noble families of the 18th century. Pierre Frey upholstery plays on the estate’s green spaces, with flowers blooming along the fabric-clad walls. The Necker Suite, one of the largest at nearly 1,300 square feet, is a tribute to the 18th century Finance Minister and statesman Jacques Necker. (1732-1804)

The Madame de Fouquet room is inspired by the extraordinary life of the famous socialite who married the Marquis de Fouquet, a hero of the American War of Independence. Together they lived at Le Grand Contrôle until 1787

Guests of this exclusive accommodation have at their disposal 810 hectares of beautiful gardens, indoor pool, spa, with a hand-painted fresco and a Carrara marble checkerboard floor included.

Staying at the Grand Contrôle means enjoying numerous privileges, such as access to rooms that are usually closed to the public. Morning private tours of the Grand Trianon before opening the facilities to tourists. Intimate evening tours of the personal quarters of the kings of France. 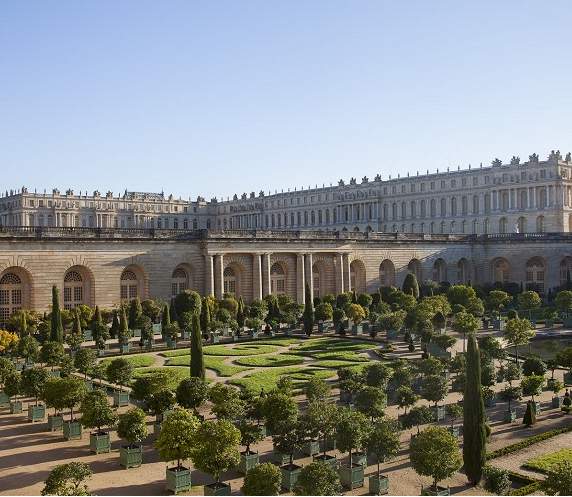 The most fantastic thing is the unprecedented access that the hotel offers to the palace. Every night after the imperial gates are closed to visitors, guests can take guided tours and explore nooks and crannies. Including the forbidden dressing rooms connected to the king and queen apartments.

The most exciting thing is visiting a Hall of Mirrors empty of tourists. This impressive gallery where some of the greatest royal festivals were held and where the Treaty of Versailles was signed in 1919.

Certain parts of the estate are also exclusively accessible, including the labyrinth of gardens created by landscape architect André Le Nôtreis, before Versailles opens to the general public.

The underground spa has hand-painted frescoes and a checkerboard Carrara marble floor. There is a 50 foot pool.
At the hotel there are more than 100 employees, all passionate about Versailles, wearing matching tailored vests and trousers from Marie-France Croyeau de Terre et Ciel. All employees were selected from the best hotels in France. 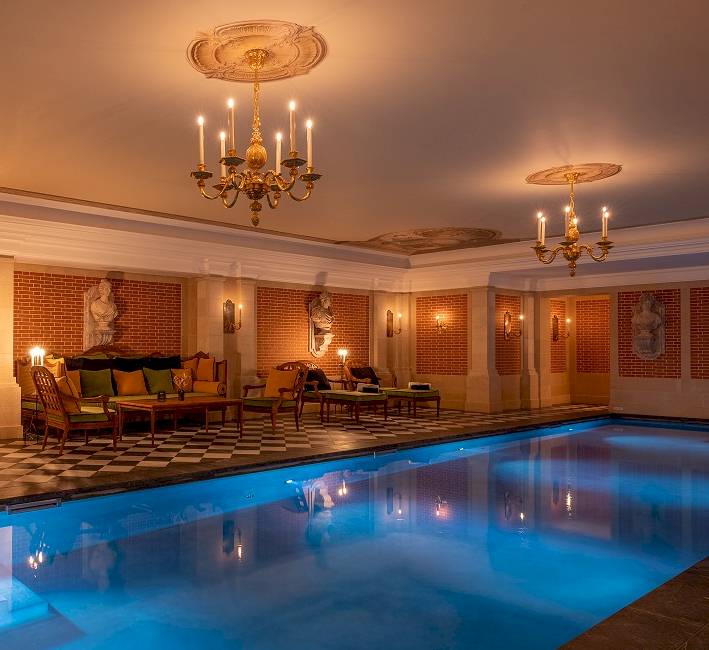 Several butlers are part-time actors, ready to entertain at any time. Their enthusiasm for this role play is evident when they explain the finer details of Royal life at the Palace of Versailles.

The gastronomic proposal by Alain Ducasse

Alain Ducasse offers diners an original gastronomic experience inspired by the meals of Louis XIV and the Grand Couvert, an ancient French ritual in which the king and queen dined in front of the public.

Alain Ducasse, He is known for his Michelin-starred restaurants in London and Paris. All meals here begin, as Louis XIV would, with a glass of warm vegetable broth. Dinners are five steps,

How to get to Versailles

From any international airport from the United States to Paris France. Versailles is 40 minutes by train (C) and 1 hour by car (118 highway). The hotel is located at: 12 Rue de l’Indépendance Américaine, 78000 Versailles, France
Phone: +33 1 85 36 05 50
Remember to comply with all TSA regulations regarding Liquids, as well as the TSA regulations on medications. For greater agility in boarding, you can contract TSA Pre Check as an additional service. See Map of Versailles