We visited Gettysburg National Military Park ( National Park service). Here are the fields where one of the most important battles of the American Civil War was fought.

Before the Battle of Gettysburg

The American Civil War begins in March 1861 with the proclamation of President Abraham Lincoln and the declaration of secession by the 11 southern states, forming the Confederation of Southern States with its capital in Richmond and as President Jefferson Davis.

After important victories from the South, President Davis, meeting with General Lee in Richmond, decided to take the war north. This would improve the depleted supplies of the Northern Virginia Army and harass northern states by forcing a peace agreement. 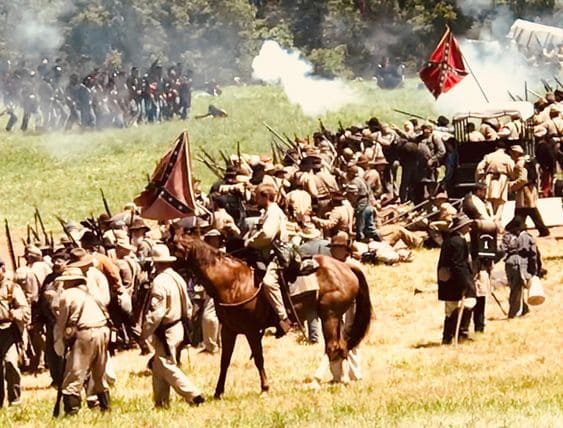 In May 1863 Lee begins his journey to Pennsylvania by hiding his position using the Blue Ridge Mountains and his cavalry. On the other side was the Army of the Potomac charged with defending Washington from a possible Confederate attack. In command of this army was General Joseph Hooker. Military decisions were heavily influenced by politicians. This situation leads Hooker to resign from office.

By the end of June, Lee has already crossed the Potomac River, entered Pennsylvania, and pauses on the road to stock up before storming the city of Harrisburg, the capital of the state of Pennsylvania. The Union Army does not know the whereabouts of Lee's army, and on June 28, three days before the battle, General Meade is appointed commander of the Potomac Army. His intention is to find Lee's army, engage in combat, and eliminate him. Lincoln wanted a more offensive general than his predecessor Hooker. 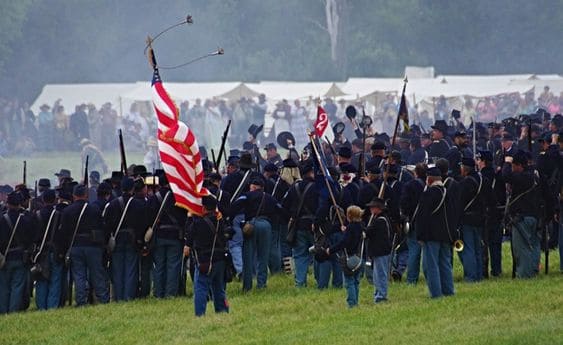 Battle of Gettysburg: 1st of July

At 7:00 a Confederate infantry column approaches from Cashtown in search of supplies at a shoe store located in the city as seen in a newspaper advertisement. A skirmish ensues.

The Union cavalry fights against the dismounted enemy. Enemy advance is delayed until reinforcements arrive. During the battle, General Reynolds dies from a shot to the head creating a command vacuum. 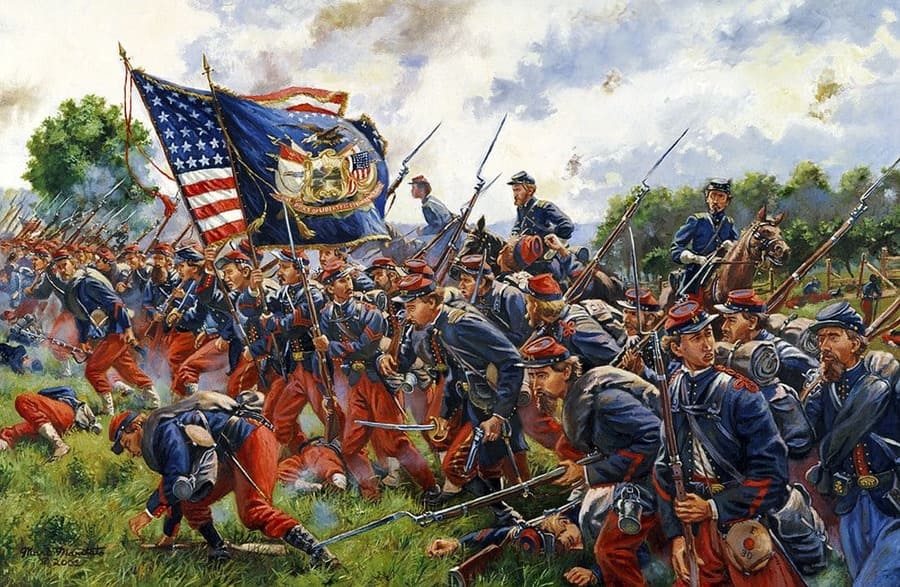 With the entry of the troops of the southern generals A.P. Hill and Ewell, those from Virginia force the enemy to retreat through the city to the southern highs on Cementery Hill. During the maneuver they make numerous prisoners in the city. The General Lee arrives on the battlefield at noon and orders Ewell that a possible attack on the disorderly Cementery Hill troops could give them victory. But Ewell prefers to wait for reinforcements that don't arrive until nightfall. It is then that Meade arrives on the battlefield with the bulk of the Army of the Potomac.

Meade and his officers decide to take advantage of the hills and act defensively. In this way, the Union soldiers dispose in a large arc to the south of the city in defensive positions in height from Peach Orchard to the west, Cementery Hill in the center and Culp’s Hill to the east. In front of them the Confederate forces of Generals Longstreet, A.P. Hill and Ewell respectively.

The morning passes calmly with small skirmishes of forces. In the early afternoon of the second day, Lee's attack on the flanks of the Union begins. Longstreet launches a fierce onslaught on the Union's advanced position at Peach Orchard. During the attack, Union General Sickles is wounded and his leg is amputated. Meade sends reinforcements from the center and right flank to save the left flank. Bloody fights follow each other at Wheat Field, Devil's Den and the Big and Little Round Top levels south of the Peach Orchard. Longstreet is finally rejected by the reserves sent by Meade that save the left flank. 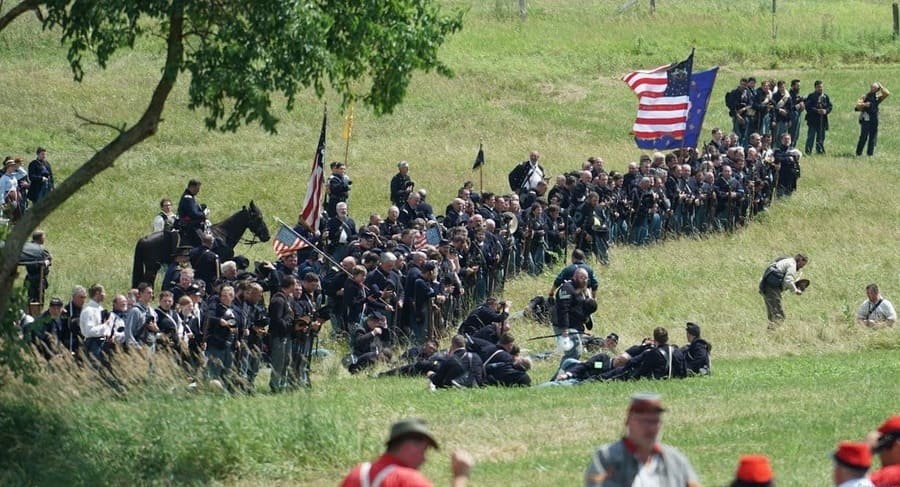 Ewell fails to occupy Culp’s Hill on the right flank and one of his officers is seriously injured in the assault. The day ends without Lee's army taking the hills from which Meade defends himself.

Following Ewell's further failure to take Culp’s Hill, one of the largest and most memorable disasters in American military history will take place: The Pickett Charge. (View National Park Service ) 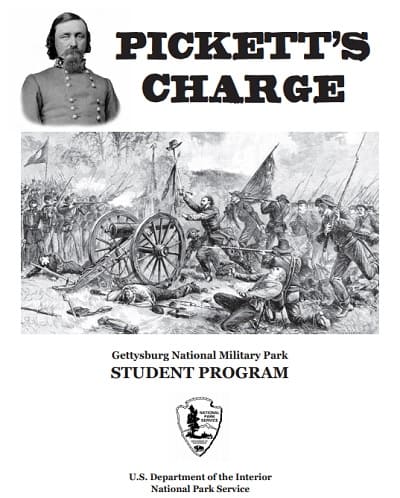 Longstreet did not think that charging with Pickett's fresh troops over the center of the enemy line was a good idea and he let Lee know that. But he obeys Lee's orders, which he thinks is a good Idea.

At 13:00, 170 Confederate guns open fire from Seminary Ridge and federal batteries respond to the attack. The thunderous duel lasted 2 hours and was heard in Philadelphia, at a distance of 140 miles. Confederate cannon shots are long and hit the horses located in the Meade HQ.

Amid the thick smoke of the last artillery salutes, the 13,000 soldiers under Pickett's command begin their charge. They will have to travel a mile of open field to reach the positions in the center of the line of the blue jackets. Volunteer soldiers see family and friends fall under fire from the intact Union artillery, but do not stop their march. Only half of those who started the charge come into contact with the enemy. At four in the afternoon, 50 minutes after loading began, Pickett retired. Lee has lost his first battle. 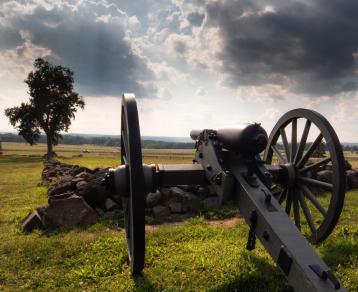 51,000 Americans left their lives at the Battle of Gettysburg. It took almost 50 years until the third battle of Ypres, in WWI, to see a number of casualties in a battle of a few days.. About 5,000 horses died in battle.

The civil war would go on for two more years but Gettysburg would mark the beginning of the Northern offensive. Lee's army never recovered and would surrender to Grant in 1865 marking the end of the war.

An accumulation of coincidences caused these two armies to meet in Gettysburg, a small town in Pennsylvania located at a crossroads between farms, forests and small hills, causing the greatest battle ever fought on American soil.