Ancient  Coffee Shop in Bilbao: Cafe Iruña  The Cafe Iruña is located in front of the Albia Gardens, next to Ledesma street and with double access from Berastegui and Colón de Larreátegui streets. It was inaugurated on July 7, 1903 by the Navarrese promoter Severo Unzue Donamaría. It draws attention for the original distribution of its 300 square meters of floor, subdivided into different spaces in which the quality of its tiles and the Mudejar-inspired decoration stand out, with polychrome …

The Modern City of Bilbao

Walking Bilbao: It is a county located in the north of Spain The town of Bilbao is the capital with more than 340,000 inhabitants and is the most populated city of the autonomous community that extends along the estuary of Bilbao or the Nervión. The city is surrounded by two mountain ranges with an altitude that does not exceed 500 meters. It was founded at the end of the 13th century. This is a guide to tour Bilbao in two days 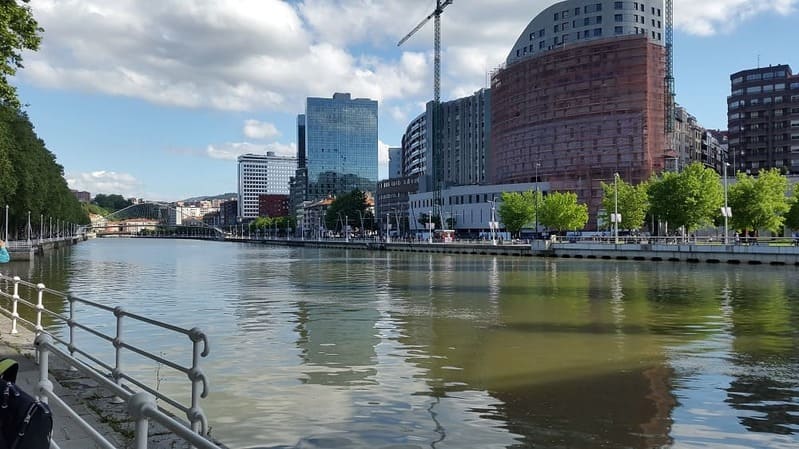 We arrived from Madrid by air to the Bilbao airport. To go to the city center, if you do not choose the taxi, the bus is the best option. We take the Bizkaibus A3247, which costs 1.45 Euros and you can buy it in the same Bus. The bus takes about 30 minutes to go from the airport to Bilbao Termibus.

The intermediate stops som: Alameda Recalde 14, Plaza Moyúa and Gran Vía 74 that are located in the center of the city. Gran via 74 was our stop and from there to the hotel. 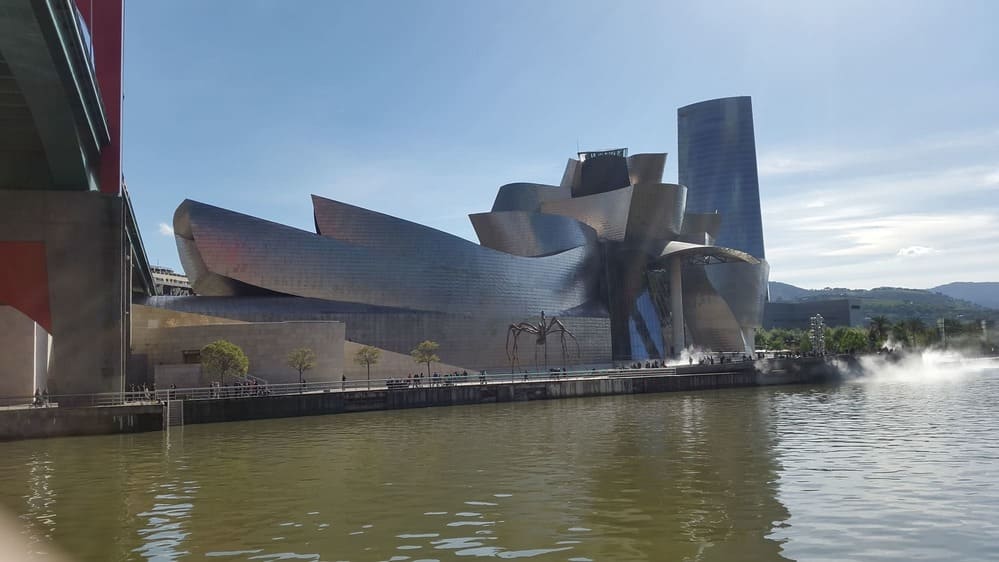 In the northern sector of the estuary we find the Guggenheim Museum. Avant-garde building designed architect Frank Gehry, often said to look like a whale without a head or tail. The entrance to the museum is the dog statue called Puppy, covered with flowers. In the back of the museum, next to the La Salve Bridge, we walked between the legs of a gigantic bronze spider. 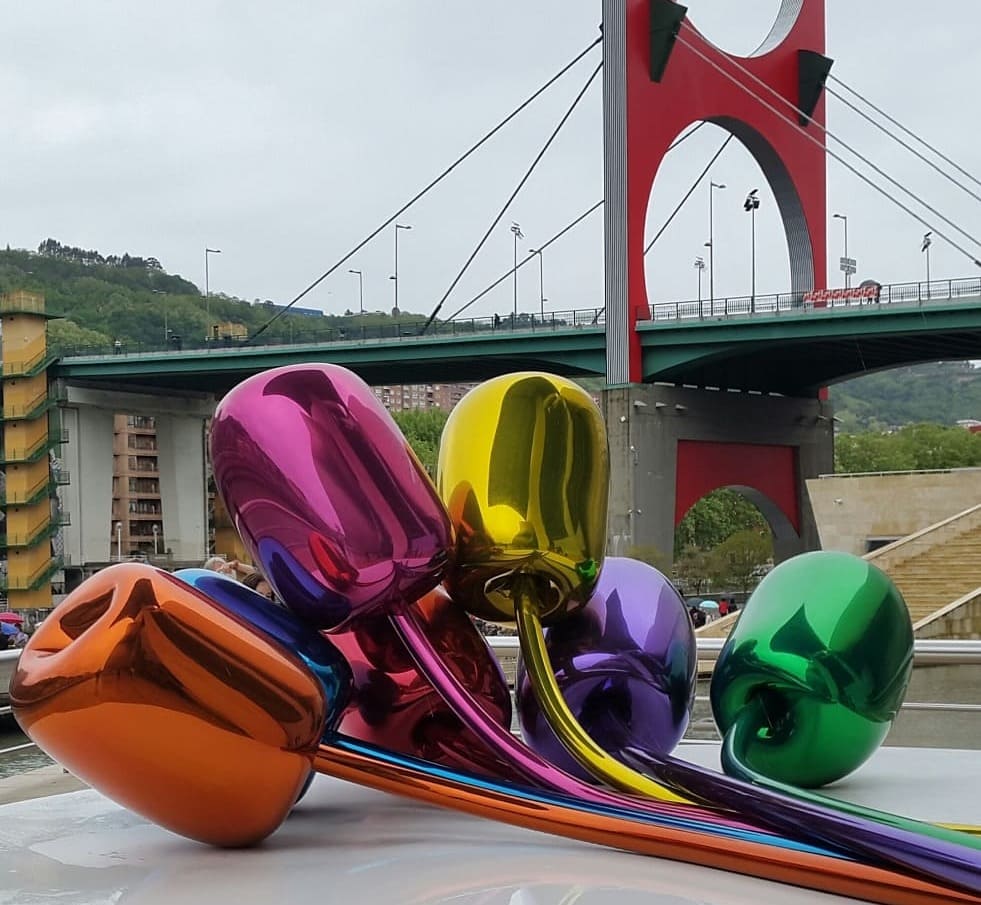 Near the museum is the Doña Casilda park, a relaxed place to take a walk. Opposite is the University of Deusto, inaugurated in 1886, of neoclassical style.

Inside the Guggenheim Museum, there is a collection of modern and contemporary art that is one of the best in Europe. We recommend going in the morning to avoid the agglomerations of people.

After leaving the Museum, we pass by the Calatrava Bridge and continue on foot for 20 minutes until we reach Bilbao City Hall. It is an eclectic construction, with a mixture of neoclassical styles and baroque details. You can enter and see an Arab style room, decorated with tiles and golden arches that remind us of Muslim palaces

The Old Town of Bilbao

Near the town hall of Bilbao we will know the oldest part of the city. Following the river on Pasealekua Street, about nine blocks away, we will see the Arriaga Theater. It is a Baroque building with a convex facade that reminds us of the exterior of the Garnier Palace in Paris. We recommend visiting it to appreciate the luxury and good taste of its interior.

Leaving the theater we will find the old town of Bilbao also called seven streets. This is the oldest neighborhood and the original nucleus of the city of Bilbao. In this neighborhood are the Cathedral of Santiago and the churches of San Antón and San Nicolás.

We can also appreciate old buildings such as the Cafe Bar Bilbao, which is one of the oldest coffee shops in Bilbao. We can also visit the Basque Museum in Bilbao, which is located in the Plaza Miguel de Unamuno. This Museum that tells Basque history is in a 19th century building, which is a work of art in itself.

The Cathedral of Bilbao

On the second day we started with the Cathedral of Santiago. It is a Gothic church that is located in the center of the old city and is dedicated to the Apostle Santiago, protector of the city. Very recently, it was restored and its entry is free, at any time, except during religious service hours.

After visiting the cathedral, we walked along the riverbank to visit another religious building in the city. It is about the church of San Antón, built at the beginning of the 15th century. Its style is eclectic being the Gothic the predominant one with Renaissance details in its main door and Baroque bell tower. The main door reminds us of the Notre Dame Cathedral in Paris or the Strasbourg Cathedral. Both in France 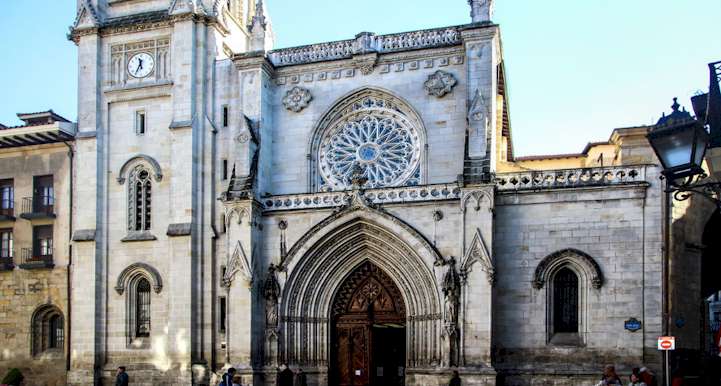 This Palace, also called Congreso de la Música, is a tribute to the Bilbao shipyards. It represents a ship stranded in the estuary. Inside it is one of the most important congress venues in Europe. It is built in the same place as the old Eskalduna Shipyards. 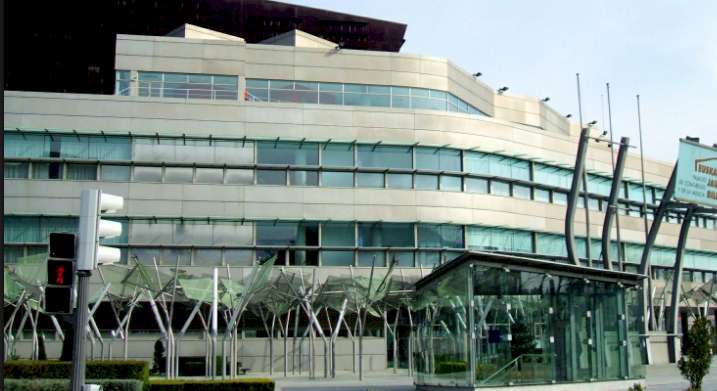 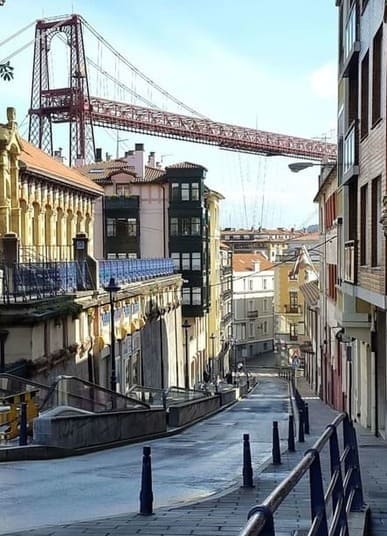 We propose to visit Portugalete (see below how to get there from Bilbao), not only to visit the Bizkaia Bridge (or Hanging Bridge) but also the city. It was the first ferry bridge in the world and was manufactured to move passengers from one bank to the other in a mechanized way (between banks 160m). Opened in 1893, it connects the towns of Portugalete and Getxo. 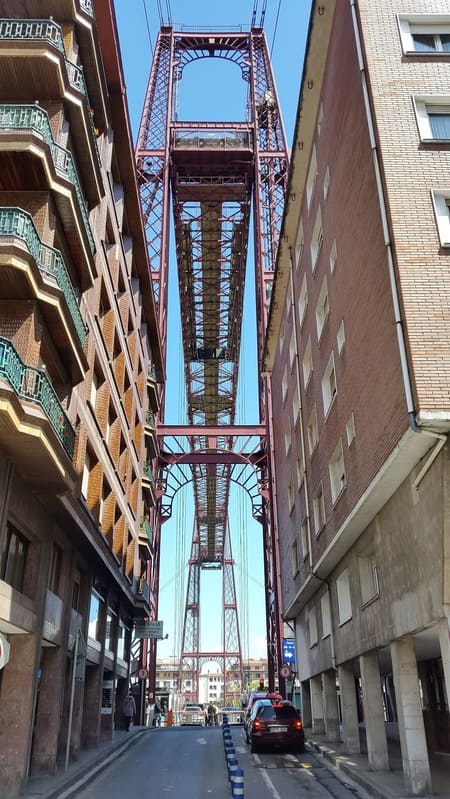 The bridge is composed of a gondola that hangs from steel cables from a 63-meter-high steel structure over the Nervión River. In about 92 seconds, the gondola carries 6 cars and 200 people

Crossing the Nervion by the Hanging Bridge, you can access the right bank, where nineteenth and early twentieth century palaces are located. This was the golden age of the city of Getxo when the shipyards were fully operational. You can see the 20 mansions of Getxo in a self-guided visit.

You can also visit these places

How to get to Portugalete