Shenandoah National Park:  Just 75 miles outside of Washington DC is a peaceful and quiet national park. It has huge mountains, majestic forests, and breathtaking views. It looks like a small slice of wild paradise, filled with wildflowers in the spring, incredible foliage in the fall, and opportunities for bird and wildlife watching.

Much of Shenandoah consisted of farmland and growth forests used for logging. Today, it is not possible to know where there was agriculture, logging or grazing. Much of the forests have grown over time and have covered human activity.

It is now full of trails, plus 500 miles, including 101 miles of the Appalachian Trail, and serves as a refuge for many wild animals. There are more than 200 species of resident and transient birds, more than 50 species of mammals, 51 species of reptiles and amphibians, and 30 species of fish that can be found in the park.

Many visitors choose to drive Skyline Drive, which runs 105 miles along the top of the Blue Ridge Mountains for a breathtaking view of the park. This route then merges with the Blue Ridge Parkway

Unlike most national parks, Shenandoah has been inhabited by settlers for more than a century. To create the park, Virginia state officials had to acquire 1,088 private areas and donated land. This was a historic movement; Never before has such a large area of ​​private land been turned into a national park.

In the early 1900s, the first calls for national parks in the east were heard in Congress. However, it would be two decades before Shenandoah National Park was authorized and another 10 years before it was established. During that time, President Herbert Hoover and his wife established summer residences on the Rapidan River while construction of Skyline Drive began.

The Civilian Conservation Corps was established and moved to the area, and more than 450 families of mountain residents were relocated from Blue Ridge.

When to Visit - Shenandoah National Park 2022

The fall. When the fall foliage arrives in Virginia, so do many tourists, as it is an amazing landscape, full of red, yellow and ocher colors. Shenandoah National Park is also nice to visit during the spring, when the wildflowers are in bloom, or during the warmer months of the summer.

How to Get Shenandoah National Park

There are airports located near Washington DC, (Find Flights) and Charlottesville, VA. If driving from Washington, DC, take I-66 west to US 340 and then head south to the park's Front Royal entrance. The trip is approximately 70 miles. If traveling from the west, take US 211 through Lurray to the Thornton Cap entrance or you can go east on US 33 to the Swift Run Gap entrance.

An entrance fee is charged upon arrival. There are passes for vehicles from 1 to 7 days. Also for motorcycles and for people who go on foot or by bicycle. You can also buy an Annual Pass that allows a full year of unlimited visits.

There are two different ways to enjoy this national park: a scenic drive or a hike along numerous trails. The combination of both forms is recommended. Don't forget to enjoy the Skyline Drive, (see map here).  Note that Shenandoah National Park is one of the few national parks that allows dogs, so you can go hiking with them.

Skyline Drive - One suggested route is to travel from Front Royal to Big Meadows, which can take a full day. Before you start driving, take the 1.2-mile self-guided Fox Hollow Trail to see the homes named after the family that settled there. Once behind the wheel, keep an eye out for several overlooks to stop for the view of the Shenandoah Valley. In good weather the views are spectacular.

The suggested route is to travel from Front Royal to Big Meadows, which can take a full day. Before you start driving, take the 1.2-mile self-guided Fox Hollow Trail to see the homes named after the family that settled there. There are several lookouts (see map) to stop for the view of the Shenandoah Valley. In good weather the views are spectacular. 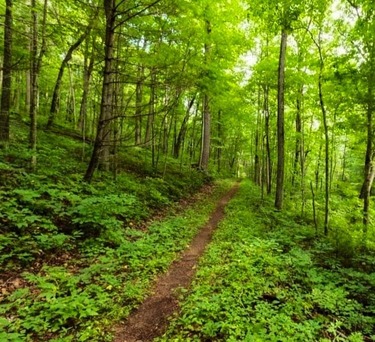 Easily accessible at Matthews Arm Campground, this 1.7-mile trail takes visitors into an oak forest to experience what it was like 150 years ago. You can see traces of the first settlers, such as stone walls and ancient roads.

The 1.6-mile trail will reach the cliffs at the summit of Stony Man, the second highest peak in the park.

Here you can see a waterfall in a very short route, about 1.4 miles.

It is a national historic landmark that President Herbert Hoover and his wife used as their summer camp.

It is a short 0.8 mile hike that this mountain takes visitors climbing over the rocks. The 360 ​​degree view that is truly amazing.

For viewing wildflowers, this 3-mile (roundtrip) hike is your best bet.

Located at the southern end of the park, this area is ideal for exploration. They are repopulating with trees, and many birds can be seen. There are also two panoramic points on the summit that show the Shenandoah Valley. 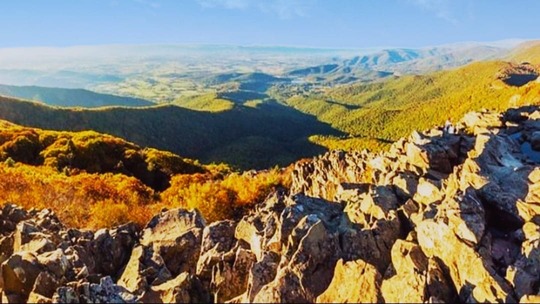 At the southern end of the parks, you will find this national park service road that connects Shenandoah National Park to the Great Smoky Mountains National Park. (see the Review and map)

There are also three available accommodations within the park: 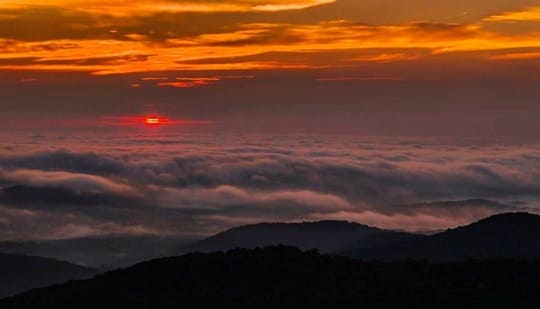