Treadwheel Crane: They were the largest cranes in Medieval Europe . Their usual operation for wheel cranes were with two squirrel cages and for two or more operators. Originally from the 15th century, it was built between 1441 and 1444. Today it is one of the most representative emblems of the city of Gdansk.

The crane building in Gdansk was built in the Gothic style with steep roofs. The central tower is 31 meters high and exceeds the towers on the sides that are 24 meters high.

There are a couple of Wheel Cranes in this Building. The highest wheel crane has two pairs of wheels that are mounted on a wooden beam-axis of 0.60 m in diameter. The free segment between the two wheels is used to wind the rope or rope. The wheels have eight spokes per side. They measure approximately 6.5 meters in diameter. The crane is installed on the fifth floor at a height of 20 meters from the floor level.

The second Wheel Crane is on the first floor and the bottom is visible from the street. Today it is protected and fenced. This Crane is twin of the one on the upper floor. The last crane master who operated them died in 1858.

The maximum load capacity is up to four tons, and warehouses could be raised up to 11 meters. It was also used for the installation of ship masts, so its lifting height was 27 meters. To know this the barn and the cranes it contains, you have to buy the tickets in the maritime museum that is opposite. There is a ferry to cross the canal.

While Gdansk is today a Polish city, until the Second World War it was German territory and the city was called Danzig. The Free City of Danzig was an autonomous city-state established on June 10, 1920 Between 1772 and 1920 I am part of Prussia. According to the Treaty of Versailles in 1919, Danzig ceased to be part of Germany and remained under the domain of the League of Nations. 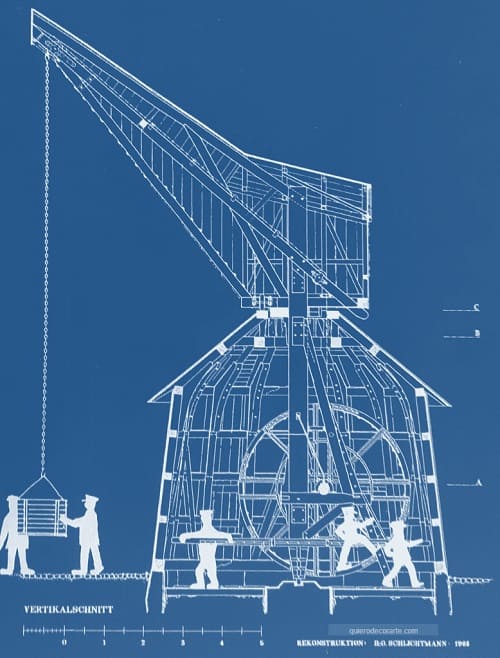 The city was annexed by Nazi Germany on September 2, 1939 and later in 1947, transferred to Poland, after the end of World War II. Finally we will say that the wood sector, during the war, was destroyed but the structure was not. That allowed its reconstruction. in 1962