In the history of tourism the travelers check had a prominent role. But there was a history of the middle ages although it seems incredible.

Traveler’s Checks History of Tourism: The unified Temple Church, between Fleet Street and the River Thames, was consecrated in 1185 as the London home of members of the Order of the Poor Knights of Christ and of the Temple of Solomon. Also known as the Knights Templar.

The Knights Templar were warrior monks, part of a religious order with a hierarchy inspired by theology, a declaration of principles, and an ethical code. They were also engaged in holy warfare and had a military structure. How did they end up getting into banking?

Jerusalem had been conquered in the First Crusade in 1099 and, shortly after, pilgrims began to arrive after traveling thousands of kilometers on their journey through Europe. Pilgrims, you had a problem because they had to have enough to pay for months of food, transportation and shelter. Of course you couldn't carry large amounts of money with you, as you were a perfect target for thieves.

Who Invented the Traveler’s Checks?

The Templars solved the problem of moving cash. Pilgrims could deposit their gold at the Temple in London and withdraw it at the Temple in Jerusalem Instead of carrying their money, they carried a letter of credit. The Order of the Poor Knights of Christ and the Temple of Solomon were the inventors of the Traveler’s Checks. That was the solution of the Knights Templar

The order of the Knights Templar was very powerful in England. The Temple Master had a seat in Parliament as Primus Baro (First baron of the kingdom). The Temple was regularly used as a residence by kings and representatives of the Pope. The Temple was also used as a deposit bank, sometimes against the wishes of the Crown to expropriate the funds of the nobles who had confined their wealth there.

The independence and wealth of the order throughout Europe is considered by most historians as the main cause of the fall of the order. Event that happened in 1307

A merchant from Lyon in 1555 who wanted to buy Florentine wool could go to his banker to get a bill of exchange. The bill of exchange was a credit note, a promissory note.

That promissory note was not denominated in French pounds or Florentine liras. Its value was expressed in ecu de marc, a private currency used by its network of international bankers.

If the Lyon merchant traveled to Florence, or sent his agents, the banker's bill of exchange in Lyon would be recognized by the bankers in Florence, who would exchange it for local currency.

This network of bankers allowed a local merchant not only to exchange currency, but to import his creditworthiness from Lyon to Florence, a city in which no one had heard of him.

Traveler's checks were first issued on January 1, 1772 by the London Credit Exchange Company for use in 90 European cities. In 1874 Thomas Cook & Son issued circular notes that were the same as traveler's checks.

In 1850 Wells Fargo joins two more companies to form the American Express Company. By linking cities from coast to coast and from border to border, the territory of the United States is covered. The company's policy is to meet the needs of transporting valuable items. The concept of customer services takes precedence over any other

At that time, several brands of traveler's checks were commercialized; the best known were Thomas Cook & Sons, Bank of America and American Express. Between the 1850s and 1990s, travelers checks became one of the main ways that people took money on vacation for use in foreign countries without the risks associated with carrying large amounts of cash.

Between the 1850s and 1990s, travelers checks became one of the main ways that people took money on vacation for use in foreign countries without the risks associated with carrying large amounts of cash. In  WWI More than 150,000 Americans are left homeless in Europe, and American Express provides them with money and Travelers Checks, thus distinguishing themselves in customer service and deepening the concept of protection. 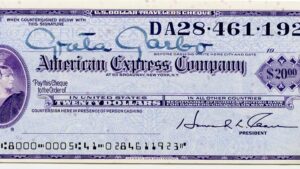 At 1930 during the depression of the 1930s, when all the Banks closed their doors in the United States, American Express continued to exchange its Traveler's Checks. In 1958 the American Express Card was launched and the first New York Operations Center was created. Initially, the Card was purple (1969) like Traveler's Checks and not green, the color of money, as it is from 1969 to today.

The card was created as an extension of the company's travel and financial services, in order to be as good as gold.