Best monuments in Spain.  Romanesque, Gothic, Renaissance or Mudejar style that Spain has.

In Spain the best of ancient architecture meets. There are so many architectural styles, beautiful buildings and monumental constructions that it is difficult to choose only 10. Some of the monuments on the list are unique in the world.

Arab writers used to compare Granada to a great Crown on whose forehead stands the diadem of the Alhambra. The Nasrid style is predominant. This monument is a superposition of different eras and architectural styles.

It was originally built in 889, in the middle of the Middle Ages, and then largely ignored until the Moorish conquest. The Muslims brought this palace out of ruin and turned it into a real architectural gem. With a clear Byzantine influence, the artists who forged this piece of monument developed a new style that is reflected in the capitals, arches and decorative details of the ceilings.

When the Christians conquered Granada they began to remodel parts of the castle to make room for the Renaissance by removing details and decorations that were from Islam. Still today, a visit to the Alhambra is an unforgettable experience and mind-blowing beauty.

It was one of the best civil works in history. It is the imposing aqueduct that the Romans built in the 1st century and that served to transport water from the mountains to the city. Segovia’s aqueduct has 166 arches that run about 15 kilometers through the countryside and urban areas. This marvel of civil engineering has stood almost intact for thousands of years despite wars and conflicts. In 1992 the city council of Segovia decided to cut the traffic under the aqueduct since the vibration produced by the traffic was affecting its structure.

The main facade of Burgos Cathedral is inspired by those of the Notre Dame cathedrals in Paris and Reims. This is considered the most important sculptural manifestation of Gothic in Castilla. The Condestable Chapel stands out in its interior, in Elizabethan Gothic style; as well as the wonderful golden staircase and the tomb of El Cid and Doña Jimena.

The construction of the Alhambra in Granada is inspired by the magnificent details of the Cordoba mosque. This Umayyad-style religious building began to be built in the year 785, after the Muslim invasion. The work was growing throughout the time that the Islamic conquest lasted. But once the Christian Spanish regained control of the city, the modifications and additions began. In 1499 the mosque was transformed into a basilica in the Renaissance style. The Christian cathedral and the Muslim mosque became one building. Without physical or spiritual divisions, two opposite worlds in many ways coexist in perfect harmony, complementing each other stylistically. The history of civilizations summed up in one of the most beautiful monuments in Spain.

The Walls of Avila is one of your best preserved monuments in Spain. It is the best preserved walled enclosure in the world. Ávila’s wall was built between the 11th and 14th centuries to prevent Muslim attacks on the city and witnessed battles and conflicts. To get to know it better, you can take a walk outside. It is only 2 miles and can be traveled during the day and is an amazing sight at night.

The Sagrada Familia is the unfinished work of Antoni Gaudí, a modernist architect, It is also the monument that attracts the most tourists a year in Barcelona. This huge temple has a magnificent façade of the Birth of Jesus, richly ornamented.

The interior resembles a forest of white columns that are tinted with colors thanks to the reflection of the sun on the large stained glass windows.

Work is still underway on the construction of the first sacristy, the central towers and the main facade, also known as the Portal of Glory.

The Cathedral of Toledo is the masterpiece of Gothic art in Spain. In the place where this Catholic temple stands today, what used to be the Toledo mosque used to be. You can see an Islamic column embedded inside the chapel of Santa Lucía, the marble shafts that garnish the outside of the choir or the intersecting arches are of the caliphal style in the triforium of the Capilla de Mayo.

The Alcazar of Seville, as is the case with the Alhambra in Granada, is a mixture of styles. Between the Patio de las Doncellas, the Salón de Embajadores, the baths, the Jardín de los Poetas or the Sala de los Tapices, basically almost all the architectural styles of history can be seen represented: Gothic, Mudejar, Islamic, Renaissance or Baroque.

The Alcázar has witnessed Viking attacks, civil wars and even the birth of kings. With each stage of the history of Spain, the palace expanded and took shape until it reached the present day.

It was the scene of the Game of Thrones series to locate the palace of the Kingdom of Dorne. There are dramatized visits that stage the history of the place 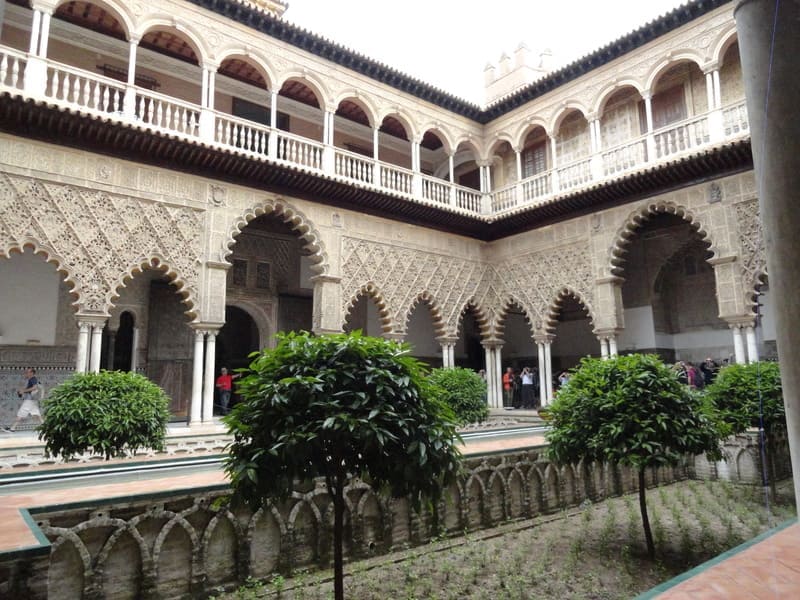 Roman Theater of Mérida, Extremadura The Roman Theater of Mérida is the oldest monument on this list of the best monuments in Spain. Its construction dates back to the year 16 BC. It was built for the entertainment of the population that lived in Colony Iulia Augusta Emerita. With the fall of the Roman Empire, the theater fell into disuse and was buried underground until an archaeological excavation in 1910 rescued it. Today this Roman building is still used for the same purpose for which it was built more than 2,000 years ago. Every summer it hosts the Mérida International Classical Theater Festival and is the best backdrop to see the Trojan women recounting their misfortunes or witness the miseries of Oedipus.

The Cathedral of Santiago is the goal of the pilgrims of the Middle Ages together with the Basilica of Rome. It is a work of Romanesque style.
The ancient tradition of pilgrims says that you have to embrace the saint who is on the High Altar

Below the altar is the crypt, the true goal of the Way: the walls of the old tomb of the apostle and, in the middle, the urn that contains the remains of the Apostle Santiago.

In the South gate, called Puerta de las Platerías. there is a facade. In the mullion, between the arches of the two doors, there is a Crismón, symbol of Christ. But the letters are backwards. The end becomes the beginning. The goal of the Camino is now the beginning of another path, of the new life that you begin. A cathedral full of symbolism and messages.

How to get Spain

By Airplane: from any city in the United States or the world, which arrives in Madrid, Capital of Spain (Europe) – then take a local plane to the airport of …..